I was asked to test and review Pjur Basic personal lubricant and I was very interested to see how it would perform in my bookings. I'm very particular about the lube I use as I find some cheaper and common brands actually give me thrush. My regular brand is German and it's fantastic but can be expensive, so I was happy to find something I could consider using as well, if it passes my tests & this product being a German brand I was hoping it did. 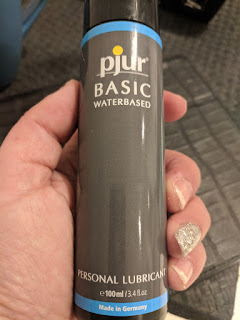 I take the role of toy reviewer very seriously, so I decided to use the Pjur Basic Lube solely in all my bookings, in my alone playtime and also with my regular partner, to test it out throughly in all the scenarios.  I wanted to make sure I was giving it all opportunity to impress and for me it did. I didn't even have to pull out my regular Lube not once in the whole time.

Outcomes:
Note: You make use lube differently to myself, so I split up my findings to make it easier.

1. I hate using cheaper lubes for hand jobs they end sticky and you need to re-apply a few times. With this product I found I didn't have to re-apply and it didn't get sticky at all.

2. For body slides and Spanish it was perfect, stayed slippery but yet not oily, so wasn't as messy afterwards on the sheets.

4. Vaginal sex, it didn't give me thrush which is great. Generally I don't use lots of lube, unless in particular positions like doggy.

Things I liked:
Easy to use, worked so well in all applications, it tasted fine, it smelled good, and as you only need a small amount it's very economical. I also liked that if it spills on the sheets that it left no mark once dried, and it's compact size makes it perfect for my toy bag.

My Verdict:
I absolutely love it. I would highly recommend it to everyone, just as good as my favourite German brand and I'm happy keep using it. It's great!
Rating - ⭐️⭐️⭐️⭐️⭐️

Posted by Sex Toy Reviews Australia at 11:47 No comments:

I didn’t know what to expect when I received the Jopen Callie Vibrating Mini Wand, I was quite sceptical about it working especially since every other vibrator I have tried hasn’t been able to do anything for me. But like most things I doubt (spoiler), I was wrong. When it arrived I was quite surprised to see it was presented very nicely in a box that opened at the front like a door (welcoming right?) and inside was the mini wand and its charging cable all neatly packed into some dark grey foam to keep it from moving around or getting damaged. The presentation was awesome. The toy itself is really nicely presented, and like most other people I know, I LOVED THE SPARKLE – the gold cap with the rhinestone button is just so beautiful and it really makes this toy feel luxurious and like you are treating yourself whenever you use it. The vibe itself is made of silicone and ABS plastic, which basically just means that its super smooth and doesn’t cause a lot of uncomfortable friction during use, it also makes it easier to clean (bonus) and also its non-toxic which is always nice to know.

It doesn’t come with very many instructions which is good (because who likes reading instructions?), and bad, because I couldn’t figure out what the heck I was supposed to do about making it turn on. Eventually I figured out that the gold portion comes off and reveals where the charging port is, which then just gets plugged into any USB charging slot. It takes a while to charge fully, about 2 hours from my count (so not great if you like instant gratification), however, that charge lasts for a while, I got about 5 uses out of one full charge before all the juice was gone and it needed to be charged again. 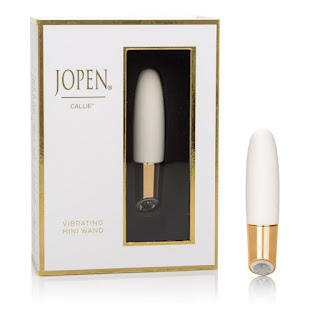 Using it was super simple, press the rhinestone button for about three seconds to turn it on, and then just one push to rotate through the seven (7!) different vibration patterns. To turn it off you basically do the same thing you did to turn it on, pretty simple and user friendly. I liked maybe 3 of the vibration patterns myself, there was a constant vibration that I did not enjoy because it made me numb, and then 6 alternating patterns, my favourite were the ones that varied in length and intensity of vibration that I would liken to a physical feeling of what a symphony sounds like with all the highs and lows. It wasn’t very heavy, its non-threatening, and its fairly quiet for the level of vibration you get.

I’m unsure if one of the design points was for it to be insertable but I tried it anyway, and I wasn’t disappointed. Its only got like three insertable inches, but if you know where you like the pressure it packs quite the pleasurable punch. I actually enjoyed this more than using it in the clitoral region, it has quite strong vibrations so using it for more than a couple of minutes really just kind of made me numb to the sensations and for me that meant that it wasn’t really doing what it was originally designed for, but it could be different for everyone, that was just my experience. Its real shining moment (ha get it?) was when used in conjunction with an insertable toy like a dildo, or during penetrative sex. I found that used in conjunction with other toys or during sex it made the vibrations less intense and I was able to use it as desired/originally intended. Another feature of the mini wand is that it is waterproof and fully submersible, which fits with the theme of ‘me time’ that the design
seems to exude.

Overall I am not disappointed at all, I would reach for this toy over and over without fail. It is beautifully designed, it looks very luxurious and made me feel kind of pampered when using it. There is bound to be at least one setting that works for everyone, and it is very versatile. It is discreet, lightweight, compact and very quiet, all positive attributes for a vibe. I am very pleased with the Jopen Callie Mini Vibrating Wand, especially at its price point (which I googled and found to be an average of about $80). I would recommend this if anyone was thinking about purchasing it.

Posted by Sex Toy Reviews Australia at 10:04 No comments: