When the Neon Luv Touch Ribbed Slims Multi-Speed Vibe (mouthful isn’t it?) arrived I was extremely excited to try it out. Unfortunately, I had a full day ahead of me, so the hype built all day long before I got to open the package and see what it was all about. First impressions when opening the package were positive. The bright neon pink colour makes it appear non-threatening (and as I later discovered, the added bonus of being able to see it in the dark) and it didn’t have that overwhelming plastic smell that most adult toys seem to have for me. Its long, about 8 or so inches (not that you can insert all of it), and slim, with a sort of oval shaped head, and what was described on the box as a soft touch coating. Its not exactly soft, because the toy itself is hard and unyielding, but it is smooth. It has a screw off top to insert the batteries into it which is where the speed dial is located, it does not have any numbers so its hard to verify the claim of ten different speeds, and is also very easy to turn on and off with movement of the cap. 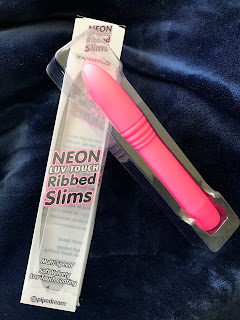 With the batteries inserted it isn’t heavy, and when I inserted them I noticed a plastic tube kind of scenario surrounding them which I assume is to provide the waterproof aspect that was advertised. I was initially skeptical about the waterproof ability, but figured out it was good very quickly (would recommend use in the shower as it drowns out the noise). The initial use revealed that the toy is quite noisy (even on the lowest setting and despite the claims on the box that it was silent), which I found off-putting, however, the vibration is strong. What I noticed while using it is that it does take a while to get the vibration at the right angle because of the shape of the head, this is because the tip basically has no vibration, its all focused in the head and the sides. The toy is ribbed at the junction between the head and the handle like thing, so I assumed it would add some extra sensation if inserted (can say that for me it added no sensation at all). Overall on the first use I was not impressed, the vibration wasn’t working for me and I got frustrated and in the end gave up. But I was determined to persevere and find a way to make this toy work for me.

After the initial trial, I have used the toy about 10 more times in various scenarios like the shower, with my partner, solo in a couple of different positions, and with a couple of different toys being used in conjunction. I’m still not finding that the vibration is where I need it (or want it) to be, it’s awkward to hold and get it to stimulate targeted areas because its not really that small, however, if you persevere it does get the desired job done eventually. Trying it during sex was off-putting to say the least, one because of its colour, and two because of how loud and distracting the noise was, it was hard to ignore and I couldn’t focus on the feeling because all I could think about was the buzzing sound it was making.

Overall, its a good toy, but for me to was a bit disappointing. I really wanted to like it, but I just didn’t. It isn’t discreet, its loud, a bit big, and very hard to clean with those ribbed bits. It also gets a bit hot with use, and sometimes (most of the time) when turning it off I unscrewed the top (which was not great with use in the shower). I enjoyed my time with the Neon Luv Touch Ribbed Slims Multi-Speed Vibe, but not enough that I would reach for it often or rave about it to people who asked, and honestly I think that for the price range ($25-$45) you could probably find better.