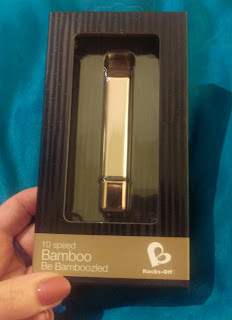 Surprisingly for such a tiny toy it packs a punch with a fairly strong vibe. That’s because instead of having those crappy small watch type batteries I had anticipated, the Rocks Off Bamboo comes with a AAA sized battery. They’ve even included one in the pack. I wasn’t expecting that, vibrators don’t normally come with batteries unless they are those tiny ones that don’t give the vibration much grunt.

Already I’m keen to test it out and see how powerful this pocket sized toy can be. It has 3 speeds and 7 different functions with different rhythms and patterns of vibration to change things up a bit, just for a bit of fun. Which if certainly was a bit of fun. I tested it out by myself and with my partner. Aside from the Bamboos looks, the shiny rose gold colour and smooth contours with a streamlined appearance, it’s also super quiet. I mean actually quiet, I’m not just saying that. It’s such a discreet toy that at one point my boyfriend walked in while I was having a play with my hand down my pants and he didn’t even notice, not even when I said “oops busted.” That’s how small and quiet it is that I could actually use it without having to take my pants off and the noise was so soft he couldn’t even hear it.

It’s made out of what looks to be plastic with a metallic coating of some type. I almost expected it to be made from bamboo with the name. But the outside of it is smooth and the angled design gives you some nice variations in sensation as you try different angles and pressures. You can use it in the shower for a sneaky play thanks to it being waterproof which is also great for cleaning or when using lots of lube. The shower is one place I haven’t tried it yet, I’ll have to give you a follow up on how I go with that. It’s fully submersible, not just water resistant so you can also bathe with it.

The design is really nice looking and unique and the size is perfect for packing to take away or just to have in your bag. It’s a bargain at the price of around $30. All in all this mini vibrator is a winner. I look forward to trying more Rock’s Off toys in the future, from what I’ve tried with the Bamboo I’m impressed they seem to make novel toys that are a bit different to the rest and I’ve heard most of them are made from silicone which is another positive for them. As the say on the pack get ready to be Bamboozled.


Review By: Zara
Courtesy of: RisqueViews